MURUGAN TEMPLES IN THE OTHER PARTS OF THE WORLD -BATUMALAI SRI SUBRAMANIASWAMY TEMPLE, MALAYSIA 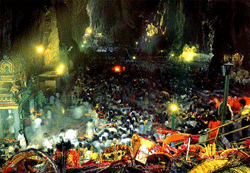 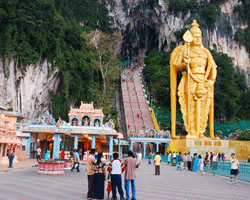 Batu Caves is a limestone hill, which has a series of caves and cave temples, located in Gombak district, 13 km north of Kuala Lumpur, Malaysia. It takes its name from the Sungai Batu or Batu River, which flows past the hill. Batu Caves is also the name of the nearby village. The cave is one of the most popular Hindu shrines outside India, dedicated to God Murugan. It is the focal point of the annual Thaipusam festival in Malaysia and attracts over more than 1.5 million pilgrims, making it one of the largest gatherings in history.
HISTORY Batu Caves is said to be around 400 million years old. When the caves were in a pristine state before 1860, several of the 18 cave mouths were used by the indigenous Besisi people (also referred to as Orang Asli) as transit shelters when they went out hunting from their jungle hamlets. As early as 1860, Chinese settlers began excavating guano for fertilising their vegetable patches. However, they became famous only after the limestone hills were found by American Naturalist, William Hornaday in 1878. Batu Caves is said to have been discovered by K. Thamboosamy Pillai, an Indian trader, in the 1800s. He was inspired by the 'vel'-shaped entrance of the main cave and was inspired to dedicate a temple to Lord Muruga located within the caves.
Religious Site In 1891, Pillai, who also founded the Sri Mahamariamman Temple, Kuala Lumpur, installed the murti (consecrated statue) of Sri Subramania Swamy in what is today known as the Temple Cave. Since 1892, the Thaipusam festival in the Tamil month of Thai (which falls in late January/early February) has been celebrated there.
Wooden steps up to the Temple Cave were built in 1920. Of the various cave temples that comprise the site, the largest and best known is the Temple or Cathedral Cave, so named because it houses several Hindu shrines beneath its 100 m vaulted ceiling.
Rising almost 100 m above the ground, Batu Caves actually consists of three main caves and a few smaller ones. The biggest, referred to as Cathedral Cave or Temple Cave, has a 100 m-high ceiling, and features ornate Hindu shrines. To reach it, visitors have to climb a steep flight of 272 steps. At the base of the hill are two more cave temples, Art Gallery Cave and Museum Cave, both of which are full of Hindu statues and

paintings. Many of the shrines relate the story of Lord Murugan's victory over demon Soorapadam. An audio tour is available to visitors. The walk to the entrance is itself quite a pleasant experience through a lake and ponds filled with hundreds of colourful fish. The Ramayana Cave occurs to the extreme left as one faces the sheer wall of the hill. On the way to the Ramayana Cave, 50-foot (15 m) tall murti of Hanuman and a temple dedicated to Hanuman, the noble monkey devotee and aide of Lord Rama. The consecration ceremony of the temple was held on November 2001.
The Ramayana Cave depicts the story of Rama in a chronicle manner quite effectively. The cave is well lit and allows the visitor to stroll leisurely viewing the depictions along the irregular walls of the cave. One might experience the feeling that one is strolling through the giant intestines of the mighty demon, Kumbhakarann, brother of King Ravana of Lanka. A 42.7m (130 feet high) high statue of Lord Muruga was unveiled in January 2006, having taken 3 years to construct. It is the tallest Lord Muruga statue in the world.
FESTIVALS
Batu Caves serves as the focus of the Hindu community's yearly Thaipusam festival. It has become a pligrimage site for not only Malaysian Hindus, but Hindus worldwide from countries such as India, Australia and Singapore. A procession begins in the wee hours of the morning on Thaipusam from the Sri Mahamariamman Temple, Kuala Lumpur leading up to Batu Caves as a religious undertaking to Lord Muruga lasting eight hours. Devotees carry containers containing milk as offering to Lord Muruga either by hand or in huge decorated carriers on their shoulders called 'kavadi'. The kavadi may be simple wooden arched semi-circular supports holding a carrier foisted with brass or clay pots of milk or huge, heavy ones which may rise up to two metres, built of bowed metal frames which hold long skewers, the sharpened end of which pierce the skin of the bearers torso. The kavadi is decorated with flowers and peacock feathers imported from India. Some kavadi may weigh as much as a hundred kilograms. After a bath in the nearby Sungei Batu (Rocky River), the devotees wend their way to the Temple Cave and with remarkable endurance they climb the flights of stairs to the temple in the cave. Devotees use the wider centre staircase while worshippers and onlookers throng up and down those balustrades off on either side. When the kavadi bearer arrives at the foot of the 272 step stairway leading up to the Temple Cave, the devotee has to make the arduous climb against gravity- against the press of the bustling masses. Priests attend to the kavadi bearers. Consecrated ash is sprinkled over the hooks and skewers piercing the devotees flesh before they are removed. No blood is shed during the piercing and removal. In 2007, the festival attracted more than 1.5 million pilgrims, making it one of the largest gatherings in history.
Administration
Batu Malai Sri Subramaniar Temple is managed by the Board of Management of Sri Maha Mariamman Temple Devasthanam, which also manages the Sri Mahamariamman Temple, Kuala Lumpur and the Kortumalai Pillaiyar Temple. It also performs the role of Hindu Religious Consultant to the Government of Malaysia in determining the Hindu yearly calendar
With this, my Chapters on Murugan Temples/Sthalams comes to an end. My next postings will be on Shakthi Sthalams/Temples.
Posted by Jolly R at 3:16 AM